Margot Robbie - Is That a New Face?

Margot Robbie is one of the most popular actresses in Hollywood and is also considered to be a natural beauty who has evolved from being a teenage actress to being nominated for an Oscar. Even with all of the praise that has come her way, Robbie has been the subject of speculation about the changing appearance of her face. Has her facial appearance changed thanks to the aging process, or did she have some cosmetic help as well? Take a look below to discover the answer!

Recently, the Instagram account, @_celebrities_before_after_ shared some photos of the thirty-two-year-old actress that showed her evolution from a teenager to her most recent look.

One of the first differences in her appearance that seems obvious is the appearance of her eyes. They have gone from being smaller and more closed at all times to much bigger and more open in the present. They also seem to have a different shape to them which makes many of her fans curious if any cosmetic treatments were performed to help her gain the current look to her eyes.

One aspect of her face that seems to have remained the same is her lips. While many actresses choose to have lip fillers in order to gain more volume and a better pout to the lips, Robbie’s lips already had a full look to them at the beginning of her career. In other words, not much seems to have changed with the look of her lips.

On the other hand, her nose has been the subject of much speculation among her fans and celebrity gossip websites. There are some celebrity plastic surgery watchers who feel that the shape of her nose has changed over the years as it no longer has the “cute button nose” look of the past. There is also the opinion that any changes to the look of her nose are the result of the aging process along with better highlighting and contouring of the nose through makeup instead of rhinoplasty surgery. 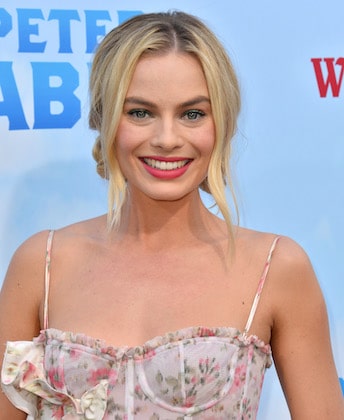 Back in 2002, a cosmetic surgery clinic in London shared the news that Robbie’s face was the most requested celebrity face of female patients who visited the clinic for nonsurgical procedures. This has caused many of her fans to speculate about whether or not her beauty is natural or if her appearance has been changed and enhanced through plastic surgery.

One Internet commentor wrote that Robbie had made changes to the “Eyelids for sure” while another one suggested that the changes in her appearance involve “Blepharoplasty, buccal fat removal, weight loss.”

On Instagram, one of her fans said, “No one is natural in the business anymore. No one.” Another person wrote, “Her nose was way better before” while also including a sad face emoji. The rhinoplasty speculation continued with a commentator writing, “The nose job is obvious. She looks stunning still.”

The comments continued with “Did she lower the tip of her nose? Usually people do the opposite. She looks great.” One other fan said. “Brow lift and a nonsurgical nose job, done with fillers.”

One aspect of her appearance that has not been credited to liposuction is the loss of fat on her body. Many of her fans simply think the actress has lost her baby fat thanks to getting older and losing weight. Some of the comments about this topic include:

While the actress has not been very vocal about the speculation surrounding her appearance and plastic surgery, there is one cosmetic procedure that she has discussed in the past. Robbie has admitted to getting help from a cosmetic dentist to help with issues related to her teeth and smile. According to Margot Robbie, “I actually have two retainers, one for my bottom teeth which is for grinding my teeth and one for my top teeth which is just so my teeth don’t move.”

The revelation about her teeth is the only type of cosmetic procedure that she has admitted to undergoing in the past. This does not mean there have not been additional treatments performed on her body. It simply means that she has not chosen to speak out about any additional work that she might have had in the past to enhance her look. Until there comes a time that Margot Robbie decides to speak openly about the topic of plastic surgery, any news and updates about her look will simply remain speculation and gossip.