Backstreet is Back With a New Look - Backstreet Boy Cosmetic Surgery

The nineties were a big time for boy bands in pop music and one group that has lasted over the years is The Backstreet Boys. While they are more “men” than “boys” these days, they still draw large crowds to their shows. Their fans have noticed a change in the appearance of forty-four-year-old AJ McLean who has admitted to having some cosmetic help to gain his new look.

FaceTite is Alright for AJ McLean

According to singer AJ McLean, his confidence is higher than ever before thanks to being part of the competition on RuPaul’s Secret Celebrity Drag Race” this year. He credits the lessons he learned during the show as his inspiration for transforming his look.

Since February, McLean has lost over thirty pounds and he also used FaceTite to tighten the skin through the use of radiofrequency waves and liposuction to get rid of hard to remove fat deposits on the body.

In addition, McLean recently celebrated a year of sobriety after two decades of fighting issues with drugs and alcohol. In an interview with PEOPLE, McLean said “I am a completely different person, and it all really started with this show. This was by far the most liberating thing I think I’ve ever done. I’m no stranger to drag, I wore drag at my wedding! I’ve very in tune with my sexuality.” He went on to describe growing up in musical theater and wearing makeup but he also stated that “doing drag like this, it just changed me.”

When asked what he will take from being on the show, McLean said, “Hands down the biggest thing I took away from this amazing experience was to love the body that you’re in. That’s something I’ve long struggled with, and this proved to be the catalyst for me to really look inwards and do the emotional work to embody the person I am and really just love myself.”

AJ McLean – When He Started to Think About Cosmetic Surgery 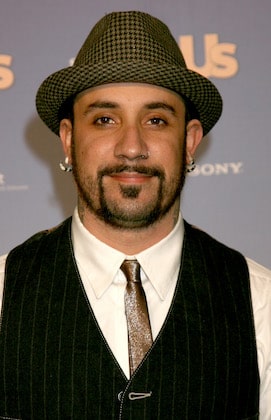 The act of getting into drag each week, to create the stage persona of Poppy Love, was the start of McLean considering cosmetic surgery on his body. He told the magazine, “Look, I have no shame in saying this: I went and got lipo on my neck.”

The idea started to formulate when a makeup artist suggested that he try taping which is a common trick used by drag performers to tape their eyebrows and neck upwards, under a wig, to tighten skin that is loose or sagging.

McLean admitted that he had grown a beard to hide the extra skin around his neck due to insecurity about its appearance. When he decided to try taping, “I got to see what I looked like with a jawline and Ru told me how beautiful I looked and I got so emotional. It really struck me.” After this experience, his wife suggested he have cosmetic procedures and even helped him find the right doctor for his specific needs. “I look 10 years younger…I just feel like a new human. And I’m so thankful for the show for giving me that little ounce of confidence to do something for myself that makes me feel so good. Without the show, I never would have done it. I would have just kept growing out a long beard and would have always been insecure about it. But now I can say for the first time, I love my profile.”

During FaceTite, the doctor performs a nonsurgical skin tightening procedure that uses radiofrequency energy to tighten the skin of the patient from within the dermis. It is generally performed to provide a better contour to the face and various small areas on the body. A small applicator that is hand-held passes the necessary radiofrequency energy, through an internal electrode, onto the targeted area of the body. The procedure is minimally invasive and does not require any incisions in the body. It has also been proven to instantly tighten the skin as well as remove the targeted amount of fat on the body. The results of FaceTite can last up to five years but the patient will still experience the natural effect of the aging process on the skin.

Liposuction is performed by a surgeon to eliminate excess fat and provide the body with an improved shape and contour. Even though liposuction gets rid of hard to remove fat on the body, it is not considered to be a weight loss treatment. The surgeon makes tiny incisions in the area of the body that is scheduled to be treated and then a cannula is inserted into the incisions so the fat can be removed via a suction tube. There will be some results that are immediately visible but there will be some bruising and swelling that prevents all of the results from being seen easily. It can take about six months for the skin to tighten enough that the results are visible to others. The fat that is removed using liposuction will not come back and the results in that area of the body are permanent.