A famous person who has celebrity plastic surgery sometimes changes more than their own appearance. They can inspire their fans to have plastic surgery as well so they can try and match the appearance of the celebrity. Although she has not admitted to having any type of cosmetic surgery, Mariah Carey is suspected of having multiple surgical procedures including rhinoplasty, a tummy tuck, breast implants, and cheek implants. The look of the famous singer inspired a woman from London to have plastic surgery to look like Mariah Carey as well as perform shows where she sings the songs of the “All I Want for Christmas Is You” superstar.

Mariah Carey Look-Alike – The Story Behind the New Look 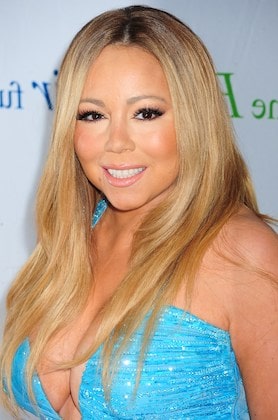 Suellen Carey is now thirty-five years old, but she was first informed of her resemblance to Mariah Carey over twelve years ago when she started her journey of gender transition.

Since she was told that she looked like Mariah Carey, Suellen decided to take advantage of the resemblance back in 2019 when she was invited to perform at a party. The performer, who was born in Brazil, spent close to $10,000 on plastic surgery so she could look more like her musical idol and grow her number of fans.

Suellen had a number of procedures to alter her look including rhinoplasty (AKA a nose job), liposuction, two breast augmentation procedures, and brachioplasty (arm lift) that was performed to reshape the appearance of her arms.

The decision to change her appearance to look more like the famous singer seems to have been a success. During the holidays, Suellen says her show bookings increase by 150% as the public wants this Mariah Carey look-alike to sing “All I Want for Christmas Is You” for them at holiday parties. During the recently concluded holiday season, her schedule was expected to include five events a week where she could earn around $18,000 by the end of the holiday season.

Suellen, who currently lives in central London, told a reporter, “Christmas is definitely the time I work the most due to Mariah’s Christmas music and of course my appearance. Everyone knows Mariah – she’s really become the owner of Christmas. Everyone sings or at least knows ‘All I Want for Christmas.’ I probably do four to five events a week until Christmas and I work any time or day.”

She went on to add, “People are very surprised- by how I look. Many scream ‘my god it’s Mariah Carey, are you twins?’ I usually joke and answer ‘yes,’ but I don’t have all those dollars in the account.”

Suellen also shared the story that her appearance is so close the Mariah’s that the security staff of a venue rushed to protect her at a concert performed by Mariah Carey.

Suellen Carey – Her Initial Reaction to Looking Like Mariah Carey

While Suellen has been aware of the likeness between her and the singer for many years, she was not sure what to make of the reaction of the public to her appearance when they initially started calling her a “diva.” She was afraid they were being negative towards her and her look. Flash forward to the present and she has embraced the similar look and attends VIP events and parties for a living.

Suellen says, “I am in love with her, she is a wonderful artist and has a perfect voice. People have always said that I look like Mariah but I never imagined that I could make a career from that resemblance.”

She added, “It’s been over 12 years since I started my transition. A lot of people said that I looked like Mariah Carey. At the time I thought it was a little strange because until then I hadn’t seen this similarity but then I started to notice. At first I thought people were even bullying me because Mariah is a diva but then I realized that was not the case. At one of her shows, the venue’s security guards protected me when I arrived as if I were her until I explained. It was very confusing. Now I do shows and I’ve also done many VIP appearances because I look like Mariah. I do a little bit of everything.”

Mariah Carey Look-Alike – How She Gained Her Appearance

Suellen claims she has undergone more than five plastic surgery procedures to look more like Mariah Carey. “I did the breasts twice, I also had rhinoplasty, liposuction, and a brachioplasty – I removed excess skin to give a more youthful and athletic contour to my arms. I changed my implants twice. The first time because I didn’t have any breasts I put [in] 450ml and after a few years I wanted bigger so I have 750ml [implants] today. I want to change and put 1000ml in, I did it for aesthetics and vanity.”

Suellen ended her thoughts about her look-alike appearance by saying, “After I had the rhinoplasty and face fillers I think I looked a lot like her. If I do makeup and hair like her, I look very similar to her.”