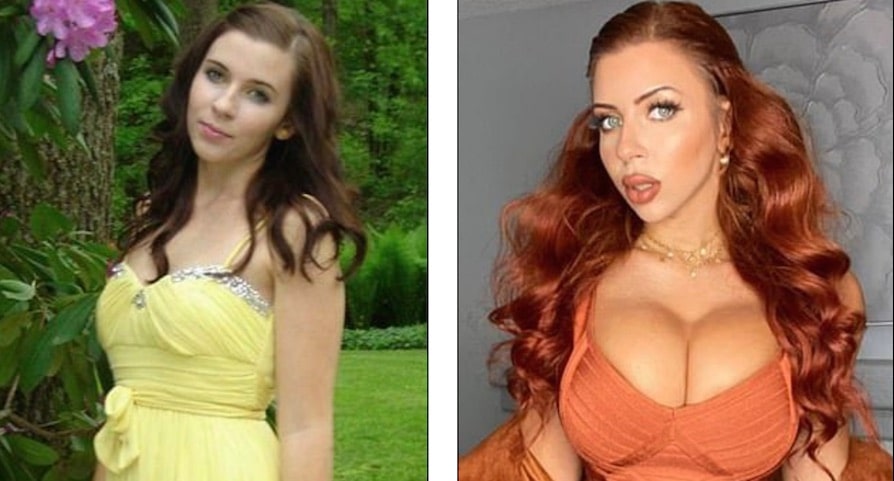 In the aftermath of her marriage, 26-year-old Amanda Martin made the decision to enhance her look in order to get more dates on Tinder. Martin spent $30,000 on plastic surgery (on a variety of procedures) that provided an overall change to her appearance. Read on to discover how her past romantic failure led to a new way for her to make millions of dollars off her updated appearance.

When she was just 20 years of age, Amanda Martin got married to an officer in the US Navy. After a few years of marriage, the couple filed for divorce which led her on the path to making changes in her life.

Martin started a fitness routine with a personal trainer who helped her to lose 68 pounds. This took her from 182 pounds to 114 pounds.  She also made the decision to have a breast augmentation procedure which gave her breast implants that were size 32DDD.

In addition to the breast augmentation procedure, she has also undergone liposuction and fat transfer along with getting butt implants and fillers.

According to Martin, her new look gave her the increased self-confidence necessary to post racy pictures on Instagram. Her goal was to use the photos to boost her profile on Tinder and get more dates. She told a newspaper, “The way I feel about myself comes from within. I have always thought my inner beauty and personality was awesome. I just like making the outside match how I feel about myself inside already.”

She added that her increased confidence gave her the desire to increase her social media presence. “I became an Instagram thot before it was a normal common thing. I was just a chick trying to get laid. “

Her new image attracted a multitude of fans and she now has more than 5.5-million followers on Instagram. With the increase in her Instagram followers, Martin decided to start an OnlyFans account. To date, her explicit and racy content has earned her 1.5-million dollars per year.

“Eventually my Instagram account and modeling career blossomed. I reinvested all my money in growing my brand and social media accounts – shooting all over the United States. This was before the time of OnlyFans. I received so much judgment for my Instagram because at the time no one really understood what I was doing. I knew I could turn this into a career.”

While the public might enjoy viewing her photos online, she said guys have been scared to date her thanks to her online persona being “kind of loud and raunchy. I used my social media to entertain people but closed-minded guys just think you’re a thot looking for attention. I almost look at my overlay sexual persona to be comedy to me – either way my audience loves it.”

Martin Finds Love after Plastic Surgery and Her Divorce

Martin says she now has millions of fans and that nobody says much to her beyond the fact that they are a fan of her photos. She added that men don’t really say much to her because they find her to be rather intimidating.

Things are looking up for her in the romance department as she has found love with 30-year-old Johan Hill who is better known online as “The Greek Savage”: In addition to their newfound love, they also work together as they make adult movies with each other.

Martin said her current relationship is different from others that failed in the past when men found her profile to be too provocative for them to handle.

Proud of Her Accomplishments in the Recent Past

In case anyone thinks Martin is only a person with a body made for social media photos, she also has a degree in criminal justice and international relations. She is also very proud of her accomplishments in the last few years.

In addition to her money from her OnlyFans account, she also made a little under $400,000 from paid ads on her Instagram account. “I latterly made a brand and a business just off being myself and entertaining people on social media. I took some gambles and I invested so much into being successful in this industry and now it has all paid off.”

Martin also wants other women to known that, while there are millions of girls that have undergone plastic surgery procedures to augment their looks, she wants to make sure they know that it is their “inner beauty and personality” that makes them stand out to others. “So don’t forget to show those off too.”