Besides being one of the most prominent features on the face, the nose can be a source of embarrassment for people who feel their nose is too large, crooked, or prominent in appearance. Rhinoplasty is a plastic surgery procedure that reconstructs the nose in order to change its shape and the surgery can also be performed to improve the ability of a person to easily breathe on a regular basis. Let’s take a look at what is involved in having rhinoplasty and what to expect during the surgery as well as the recovery process.

We’ll start with a “Real Beauty Story” from Cosmetic Town TV about the rhinoplasty journey of one of the most prominent vloggers on the Internet:

Rhinoplasty – Why Patients Want to Have the Procedure

As mentioned above, rhinoplasty (AKA a nose job) is able to alter and reshape the look of the nose. It can be performed for aesthetic reasons to improve the appearance of the nose as well as functional reasons that address structural issues that make breathing difficult for some patients.

As recently as 2020, the American Society of Plastic Surgeons reported that plastic surgeons performed 352,555 rhinoplasty procedures in the United States in the previous survey period.

By undergoing rhinoplasty surgery, patients can change the physical appearance of the nose and also gain the facial profile they desire. In general, rhinoplasty is able to alter or enhance the width or tip of the nose, change the shape of the nostrils, and reduce any bumps that are visible on the bridge of the nose along with giving the nose a more symmetrical look with the rest of the face.

In addition to aesthetic reasons for rhinoplasty, there are some functional reasons for wanting to make alterations to the nose. Some of the medical reasons include structural abnormalities that obstruct the nasal passages, nasal abnormalities such as a palate or a cleft lip and a deviated septum that causes breathing difficulties. In addition, people who suffer some form of injury or trauma to the nose might need help to breathe normally.

In general, a person who is considered to be an ideal candidate for rhinoplasty should be in overall good health, not be a smoker, have a face that has finished growing and have realistic expectations about the extent of the results they can expect to see after the procedure.

Ideal candidates also include someone who is experiencing trouble breathing on a regular basis because of an issue with the structure or function of the nose or the person suffered an injury to the nose that impacted their ability to breathe easily.

Rhinoplasty – Are There Risks Involved in the Surgery?

While rhinoplasty is considered to be a safe surgery, it is also acknowledged as a complex procedure that does involve some risks. Some of the most common risks of rhinoplasty include skin discoloration on the nose, numbness, infection, swelling, alteration of the sense of smell, inflammation, and nerve damage.

Rhinoplasty – How it is Performed 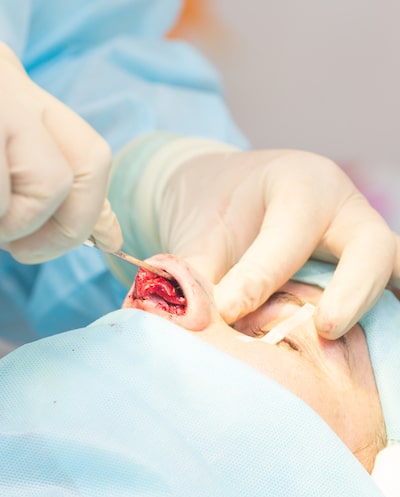 The procedure starts with the administration of anesthesia so the person will be comfortable and free of pain.

An incision is then created, and the placement of the incision depends on the type of rhinoplasty being performed. In open rhinoplasty, the surgeon will make the incision on the outside of the nose and it will run across the columella (AKA the narrow strip of tissue that separates the nostrils). This treatment option is often the preferred choice if the patient requires an extensive procedure since it allows for greater visibility of the structure of the nose.

In closed rhinoplasty, the incision is made on the inside of the nose which means there is no visible scarring that can be seen by the public.

The incision is then closed using stitches or a suture and a metal or plastic splint is placed on the nose to help with the healing process.

Rhinoplasty – How Long Do the Results Last?

Patients can expect the recovery process to be about ten days in length. They should avoid sneezing through the nose when possible and also not place their glasses on the nose. In addition, they should try to avoid extra swelling by sleeping with their head elevated.

Any initial swelling and bruising will resolve on its own after a few weeks, but it can take up to a year to see the final results.

The results of rhinoplasty are considered to be long-lasting and even permanent as long as the person who had the procedure does not experience any type of trauma or injury to the nose.

Even though the doctor will set realistic expectations before the surgery, patients who are not happy with the final results can likely have rhinoplasty revision to correct or improve the results of the initial procedure.