Rhinoplasty is performed for aesthetic reasons such as altering or enhancing the appearance of the nose. In addition, it can also be performed for functional reasons that help the patient enjoy the ability to breathe easier on a daily basis. While it seems obvious to say that rhinoplasty should be performed by an experienced and board-certified surgeon, it should also be noted that patients need to perform proper research on their doctor of choice. Research is necessary in order to avoid issues such as the ones faced by a patient in Florida that was a victim of a fake plastic surgeon performing rhinoplasty surgery on the public. 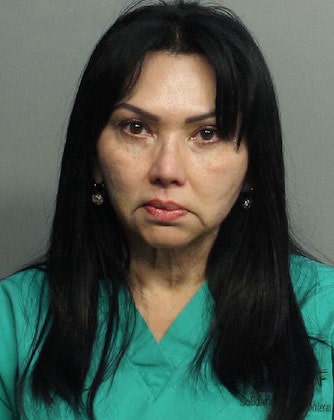 A woman in Florida was arrested for allegedly claiming to be a licensed plastic surgeon after she mishandled a rhinoplasty procedure on a male patient.

Alcalira Jimenez De Rodriguez, age 56, was actually in the middle of performing another surgical procedure when she was arrested during the middle of the surgery by police officers.  The police say she tensed up her arm and attempted to pull away while she was being handcuffed.

According to the Miami Herald, investigators were investigating the fake surgeon after they were contacted by a former patient that suffered a botched rhinoplasty procedure. The victim that contacted the police was identified as Vincenzo Zurlo. He told police that he paid $2800 for a rhinoplasty procedure that was performed on February 15th, 2020. Zurlo says rhinoplasty surgery needed to be performed again on May 30th, 2020 due to his nose not healing properly, the extreme pain he was experiencing and his overall disappointment with the results. Even after the rhinoplasty revision procedure, Zurlo claimed that his nose was still deformed.

Zurlo told the press that he met Jimenez De Rodriguez through a friend. He had been receiving Botox treatments for a few months when he decided to ask her about the possibility of having rhinoplasty surgery.

It was reported that the fake surgeon allegedly prescribed antibiotics and painkillers to Zurlo using the name of another doctor. Zurlo told a TV station, “She cannot do my nose right, she prescribed me the medication from another doctor, she cannot find a solution to my pain so something is wrong, something has to be wrong. She was the one that with that surgery that day, she ruined my life.” Zurlo claims his face was disfigured after the surgery.

Jimenez De Rodriguez, one of the practitioners at Millennium Antiaging and Surgery Center, was charged with practicing medicine without a license. She was also charged with resisting arrest without violence. Her first charge was elevated to a second-degree felony because of the resulting disfigurement to the patient.

Jimenez De Rodriguez has not entered a plea and it appears she does not have an attorney (yet) that is authorized to speak on her behalf.

Rhinoplasty, which is often referred to as a nose job, is able to make changes in the appearance or functionality of the nose. The changes to the nose are made to the skin, bone or cartilage so the nose gains the desired look while still maintaining a balanced appearance with the other features of the face. Some of the most common reasons patients want to have rhinoplasty include changing the shape of the nose, correcting any issues with breathing, addressing any birth defects that impact the look of the nose and repairing any damage to the nose suffered after an injury.

Rhinoplasty surgery can be classified as:

Once the rhinoplasty technique has been decided on between the doctor and the patient, the surgery can be performed. The surgeon will begin by making incisions in the targeted area of the nose. The skin is then separated from the bone or cartilage so the nose reshaping process can begin. The amount of bone or cartilage that is necessary to make the changes to the nose will be removed or modified. If the nose needs some additional cartilage to achieve the new look, the surgeon can remove some cartilage from another part of the body. A bone graft can also be performed to add any additional amount of bone to the nose.

Patients that are interested in undergoing rhinoplasty should schedule a consultation appointment with a board-certified surgeon. The doctor will examine the current condition of the nose to determine the extent of the changes that can be made to the nose. The doctor will also set realistic expectations so the patient will know the type of results that can be achieved through rhinoplasty.