The size or shape of the nose can have a negative impact on the self-image of a person. The nose is one of the most prominent features on the face and it often draws the eye of someone who is viewing the features of another person. One of the most popular cosmetic surgery choices is rhinoplasty, AKA a nose job, which traditionally alters the appearance of the nose through a surgical procedure. Patients who do not want to undergo a surgical rhinoplasty to gain the look they desire to the nose can ask their doctor about the changes that can be made through nonsurgical rhinoplasty.

Let’s start this informative article with a look at Cosmetic Town TV interviewing one of the top cosmetic surgeons in Los Angeles about nonsurgical rhinoplasty:

Nonsurgical Rhinoplasty – Changes It Can Make to the Nose

Instead of making an incision in the nose to create cuts or tissue grafts, nonsurgical rhinoplasty is the injection of a liquid filler underneath the surface of the skin using a needle. In general, the procedure takes less than an hour to perform and the results are seen almost immediately. It also requires less recovery time than a surgical rhinoplasty procedure.

When it comes to the changes that can be made through nonsurgical rhinoplasty, some of them include improving the look of indentions in the nose (such as a deep nasal bridge) and providing a more symmetrical look between the nose and the other features of the face.

It is not able to make functional changes to the nose such as allowing the patient to breathe easier or address and improve a deviated septum.

Nonsurgical Rhinoplasty – Learn How It Works 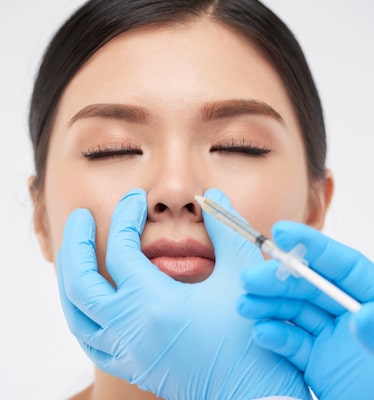 The first step in having nonsurgical rhinoplasty is scheduling a consultation appointment with a doctor. The doctor will examine the current condition of the nose in order to determine the extent of the changes that can be made to the nose.

Patients can go home after the treatment, and they need to make sure and sleep with their head elevated that night. Patients need to avoid any strenuous activity or manipulating the nose for two or three days after the treatment. It might also be necessary to avoid wearing glasses of any type for a little bit to avoid creating any type of indentation in the nose.

The doctor will examine the nose during the first follow-up appointment to see if any additional filler needs to be added to achieve the desired results. Patients might experience some pain, bruising, swelling, redness, and bleeding at the start of the recovery process, but these conditions will resolve on their own.

Nonsurgical Rhinoplasty – Are There Any Risks?

There are few serious risks and complications that result from having this procedure when it is performed by an experienced and board-certified doctor. Some of the more common risks include infection, irregularities in the appearance of the nose and itching or fever. In addition, some of the less common risks of the procedure include scarring and changes in the color of the skin.

If a patient wants additional nonsurgical rhinoplasty to address issues that might have resulted from the risks and side effects discussed above, they will need to consult with their doctor to determine when they can have another treatment after the initial procedure. In addition, patients who want to have a surgical nose job after nonsurgical rhinoplasty need to want at least one year between the two procedures.

Nonsurgical Rhinoplasty – How Long Does It Last?

The results of nonsurgical rhinoplasty can last anywhere from nine to eighteen months depending on the amount of filler used and the metabolism of the actual patient. In order to maintain the results, additional injections will be necessary.

Since there is a small chance for complications occurring after the procedure is performed, it is best for patients to only have the treatment performed by a medical professional who is experienced in performing nonsurgical rhinoplasty. The doctor should be experienced in providing superior care before, during and after the performance of nonsurgical rhinoplasty on the nose of a patient.