Tommy Lee is best known for his role as the drummer for Motley Crue along with his love life, including his relationship with Pamela Anderson, which inspired a series on Hulu called “Pam & Tommy.” In addition, his fans suspect the drummer of having Botox and fillers to maintain a more youthful look. While he has neither confirmed nor denied either of these treatments, the fact that he is suspected of these procedures makes it somewhat surprising that Tommy Lee has been in the news recently for a video he posted concerning the altered looks of the Kardashian family (as well as a picture he posted online where he flashed his fans that had nothing to do with plastic surgery).

The battle between Tommy Lee and the Kardashians began recently when Lee posted a video to his Instagram account that featured a promotional photo from the latest version of the Kardashians TV series (that airs on Hulu).

The video showed a Photoshop tool being used on the faces of the Kardashians. In the video, the tool was wiping away the faces of the reality TV stars in order to spotlight their pre-surgery/more natural looks. As an example, the video showed Khloe with the natural look to her chin and the rest of the family was shown without makeup, photo touch-ups or any cosmetic work on their faces.

In addition, the video (which was set to the song “Change” by the Deftones) included a caption that read, “Giving the Kardashians their old faces back.” Whether the audience of the post was a fan of the video or not, it did show a dramatic number of changes to the appearance of the family including the chin of Khloe Kardashian.

Once the video was posted, the comments section of the post started to be filled with the opinions of those who watched the video:

Khloe Kardashian and Her Evolving Look 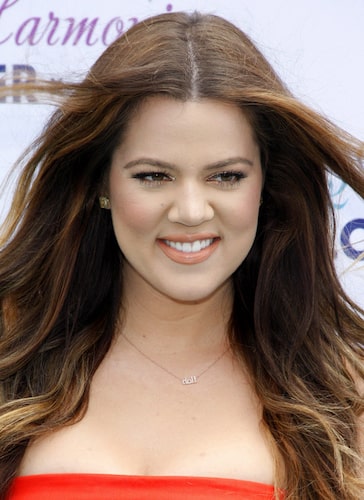 The comment about the appearance of Khloe also sparked an additional discussion about the changes in her look over the years. Even though this reality TV star at one time claimed she had only had rhinoplasty in the past, this statement is often laughed at by others who like to discuss the alterations in her appearance. In addition, she has also discussed other procedures as described below.

For example, the nose job is believed to be true because her nose has a look that is visibly narrower than in years past. Her fans also point to the pouty look that her lips have on television and in public appearances.

There is also a theory that Khloe had buccal fat pad removal because her cheeks have a slimmer look that could be achieved by the removal of fat from both sides of the cheeks.

Finally, some celebrity watchers think she had an additional rhinoplasty procedure as her nose look even narrower than when she first admitted to having the surgery.

One aspect of her appearance that is also getting a lot of attention, which is not related to the procedures discussed above, is her weight loss. There are some fans of Khloe Kardashian who worry that she is starting to look too skinny, and they speculate that the large weight loss could be due to stress regarding her love life and the ongoing drama with Tristan Thompson. The weight loss has given her a thinner face as well as a more defined look to the jawline.

While the video from Tommy Lee showing the older looks of the Kardashians gained the attention of the public, it is certainly not the first time that people have speculated on the ongoing evolution of the Kardashian/Jenner family. A trip to any bookstore or grocery store that carries magazines will show this reality TV family featured on any number of magazines. In addition, they are prominently spotlighted on celebrity gossip websites and on entertainment news shows.

The uproar over the Tommy Lee video might have occurred because he seems to have no connection to the family other than commenting on their appearance. Plus, as mentioned earlier, Tommy Lee has also seemed to enhance his appearance in the past few years, and it might have been with the help of Botox and fillers. It remains to be seen if the one video he posted will be the end of the story or if Tommy Lee will continue to discuss the appearance of the Kardashians in the future.