This week sees the release of “The Suicide Squad” and it also marks the return of Margot Robbie to the big screen. The actress is one of the most popular choices when it comes to patients wanting to achieve her look through cosmetic surgery. According to a 2020 report from The Private Clinic in London, Robbie was identified as having the most desirable face according to their clients (followed by Angelina Jolie and Meghan Markle). A spokesperson for the clinic said, “The highest-ranked female celebrities tended to favor natural beauty, [and] are showcasing glowing skin and radiant faces rather than an overly dramatic or enhanced appearance.” The question many people have about Margot’s look: Is her appearance natural or has she undergone cosmetic surgery to help gain her movie star looks? Let’s examine the evidence and see if we can come to a definitive answer. 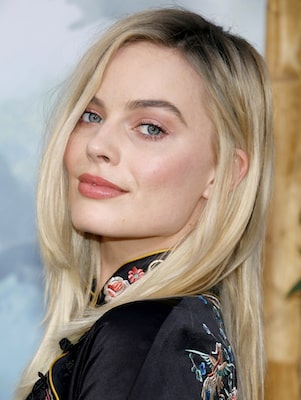 Robbie has that certain movie star “glow” about her which has caused some of her fans to speculate she had Botox to maintain her wrinkle free skin. Margot, and her team, have discussed her skincare routine in the past which can also be a reason for her youthful and healthy skin.

One aspect of her body that many agree on is that Robbie has likely not had breast augmentation surgery. When she exposed her breasts to the public in “The Wolf of Wall Street”, the appearance of her breasts was considered to be average in both their size and shape.

Margot has also been suspected of having fillers over the years. Her full lips and plump cheeks have resulted in a speculation about her possible use of fillers to gain a youthful look in front of the cameras. When asked about the appearance of her fill lips, Margot said “I use Bepanthen, which is actually a nipple cream for breastfeeding mothers or diaper rash cream for babies.” She claims the reason she uses this cream is because of her “conspiracy theory that lip balms actually have additives in them to dry your lips out so you keep buying them.”

There is one procedure that the actress has admitted to using over the years to maintain her movie smile. According to Robbie, “I actually have two retainers, one for my bottom teeth which is for grinding my teeth and one for my top teeth which is just so my teeth don’t move.” 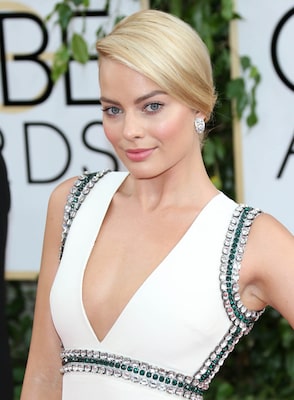 With so many women trying to gain the same look as this Australian actress, her makeup artist, Pati Dubroff, shared some of the beauty tricks and secrets she uses to give Robbie her signature look.

According to Dubroff, the “be-all and end-all” of achieving the perfect look with makeup is having skin that is healthy, glowing, and well-prepped using items such as toner, cleanser, and moisturizer. She also believes having the perfect amount of pink, creamy blush is very important.

Dubroff told an online beauty news site to “apply a creamy pink blush with your fingers on the apples of your cheeks straight after foundation, and let it sit. Then, after the rest of the face is done, a light dusting of loose powder should go on top, followed by a powder blush – like a whisper – using a fan brush.”

She added that the eyes are one area that the public is scared of over-doing but a small amount of neutral color cream shadow on the lid will help to even out their appearance as well as make sure the makeup stays in place throughout the day and night. “Soft matte tones give the eye gentle contour and prevent the application from looking flat.”

When it comes to Robbie’s eyes, Pati uses a bit of ivory, white or nude eyeliner on the lower inner rim of the eyelids of the actress in order to give them an open and bright look. A minimal use of mascara also helps the colors on the eyelids to stand out while giving the makeup a soft look.

Finally, Pati recommends lipstick and a lip liner that has a “soft pink shade with a very neutral pencil for light definition.”

Robbie recently turned 31 years old which might be considered to be rather young to consider plastic surgery. However, she is already suspected of cosmetic procedures such as Botox and rhinoplasty so there is a chance that Margot might consider having a procedure in the future. Until there comes a time that she publicly admits to any type of plastic surgery procedure, the public will simply have to continue their speculation about how she maintains her movie star appearance.