Jeff Bezos is often in the news for multiple reasons, He is the founder of Amazon.com, (currently) the second richest man in the world (behind Bernard Arnault) and he took a ride into space last month. He is also the subject of speculation about his appearance due to recent photos showing he has gained a smoother forehead and tighter cheeks along with fuller lips and eyebags. Did his trip into space alter his appearance or did Jeff Bezos have cosmetic surgery before his recent space flight? 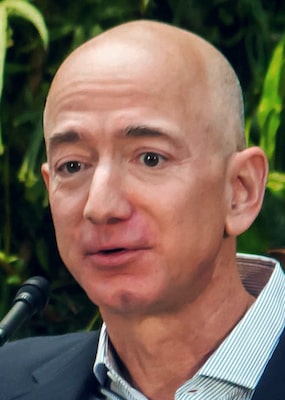 Thanks to his journey into space, more people than usual were paying attention to the appearance of Jeff Bezos in the past few months. Celebrity watchers noticed a dramatic change in the appearance of his lips along with a smoother and tighter look to his cheeks. While the 57-year-old has not publicly commented on his puffier appearance, this has not stopped the media from discussing the topic with medical experts across the country.

In an interview with The Daily Beast website, Dr. Corey L. Hartman, a dermatologist from Birmingham, Alabama, said “How could you not be obsessed [with how Bezos looks]? It’s such a drastic change.”

Dr. Hartman added, “He’s an easy target. Clearly he does not care because to me it looks to me that he went and got his very obvious filler and injectables done right before he burst into the spotlight with this trip into space.”

In a post on Instagram, Dr. Hartman remarked that the next time Bezos has fillers placed in his face before a public event, he might want to do it “earlier so that the swelling has time to die down. Keeps people (like me) out of your business.”

Dr. Hartman did stress he is a fan of men having cosmetic surgery if they feel it is right for them. “More men who are into this should go for it. So, good for Bezos for stepping out and not being afraid to go for it.”

The doctor also said there are ways patients can avoid the appearance of swelling after having injectables placed in their body. “These are temporary implants that your skin is not used to, and your skin is going to respond to what you’ve put in it.  Ice packs help and I love to use antihistamines [to reduce swelling]. There is also the potential for bruising. I think if Bezos had it, he should have given himself a bit more time before going out, and got it gradually instead of all at once, it wouldn’t be as noticeable.”

Much of the talk online about the altered appearance of Jeff Bezos centered around the fact that it seemed rather obvious he had some sort of cosmetic procedure before his ride into space.

The public did not seem to care that Bezos had a procedure as any sort of stigma in the past about men having cosmetic surgery appears to have gone away as male cosmetic surgery has become more accepted by society.

One person said, “I definitely had more of a visceral reaction to Jeff using filler – if he has used it. You just think, someone with this kind of money, could afford to have the best filler in the world. To me, he could have gold melted down and injected into his face. It’s just kind of shocking to see that, if he has had it, no matter how rich you are, you could still get bad filler.”

Dermal Fillers – How They Provide a More Youthful Look

As a person ages, the face will start to show signs of getting older such as wrinkles and a loss of volume with can lead to a thinner and less youthful look.

Fillers can be placed in targeted areas in the face to restore volume that has been lost. The fillers can help a person gain a plumper and fuller look to the treated area. Some of the most popular areas of the face where fillers can help to turn back the signs of aging include the cheeks, the forehead, and the lips. They can also be used to treat marionette lines (creases or folds that run vertically from the corners of the mouth down to the chin) and nasolabial folds (deep lines or wrinkles that form at the bottom of the nose and run to the corners of the mouth).

Even though fillers do provide a younger and more refreshed look to the face, the results are not permanent. In general, the results will last anywhere from six to eighteen months (depending on the type of filler used as well as the amount of filler placed in the face).

It is not known which type of filler Bezos has placed in his face as he has not publicly addressed his appearance. Even though he lives a very public life as one of the richest men in the world, there appears to be some secrets he wants to make sure remain private and out of the public eye.