The nose is a very prominent feature of the face and its size and shape can often be an area of concern for patients. Changes in the appearance of the nose can be made through rhinoplasty in order to alter its overall size, give it more of a balance with the rest of the facial features and help the breathing ability of a person. Rhinoplasty can be performed using a number of techniques and the difference between open and closed rhinoplasty is something patients need to know when making the decision to undergo this nose reshaping surgery. 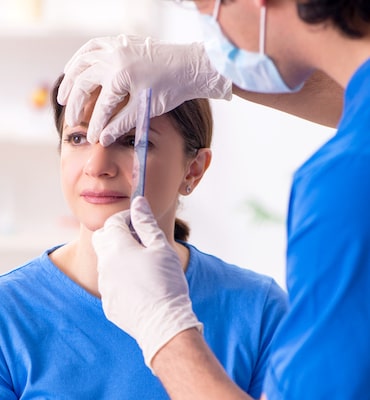 While both types of rhinoplasty procedures begin with the patient being examined by the doctor to ensure the overall health of the person, the actual performance of the surgery differs depending on the technique chosen by the doctor and the patient.

During open rhinoplasty, the surgeon makes an incision across the columella (the tissue that links the nasal tip to the nasal base) in order to lift the skin off the tip of the nose. The surgeon will then lift the skin and temporarily detach the bone and cartilage in order to reshape the nose. In order to make the desired changes, the cosmetic doctor might alter the size of the cartilage or the doctor might remove skin, cartilage or bone to achieve the new shape. The nose can also be straightened or the tip of the nose can be altered to achieve a more refined look.

Once the changes to the nose are made, the incisions are closed by the surgeon using sutures. A splint can be placed on the nose, if necessary, to support the new shape of the nose.

During closed rhinoplasty, the cosmetic surgeon can raise the bridge of the nose, lift the tip of the nose or correct any asymmetries to the look of the nose. The skin will need to be lifted in order to access the underlying bone and cartilage. In order to make the desired changes to the nose, the doctor will either remove tissue or graft additional tissue to the targeted area. Once the changes are made, the lifted skin is put back into place and the incisions are closed.

In general, closed rhinoplasty is able to be performed without changing the structure of the bones in the nose and there is less bruising during the healing phase after the surgery.

Rhinoplasty – Changing the Size of the Nose

Cosmetic surgeons can perform reduction rhinoplasty which gives the patient a nose that has a more proportionate appearance with the rest of the facial features. The new look is achieved by removing cartilage or bone to reduce the size of the nostrils or changing the look of a long nasal tip.

The cosmetic surgeon can also augment the look of the nose by building up the nasal tip or bridge through the performance of tissue or bone grafting. The nose can also be augmented by adding cartilage from other parts of the body.

The recovery time for either rhinoplasty option depends on the amount of work that was performed on the nose by the surgeon. During the first few weeks after the procedure, patients will need to sleep with their head elevated as well as avoid blowing their nose during this time period. There will be some swelling and bruising that is evident around the nose and eyes for two to three weeks.

Patients should be prepared to take about two weeks off work after the surgery. They should also avoid performing any strenuous activities or exercise until cleared to do so by the doctor.

In the months following the surgery, the nose will start to gain its new contour and settle into its final shape. Overall, it can take up to a year for the final results of either open or closed rhinoplasty to become visible to others.