Botox for a Better Attitude - See How It Can Lessen Depression

The physical benefits of Botox are easy to view as patients who have the treatment enjoy reduced wrinkles and lines on areas of the body such as the face and forehead. In addition, Botox has been shown to ease conditions such as migraines, heavy sweating, and muscle spasms. There are also some medical professionals who tested Botox for its possible use in the treatment of depression.

It was reported in 2020 that researchers at Skaggs School of Pharmacy and Pharmaceutical Sciences at the University of California San Diego went through the database of the FDA Adverse Effect Reporting System (FAERS) (of the Food and Drug Administration) to review what almost 40,000 people reported when it came to effects they experienced after the use of Botox. 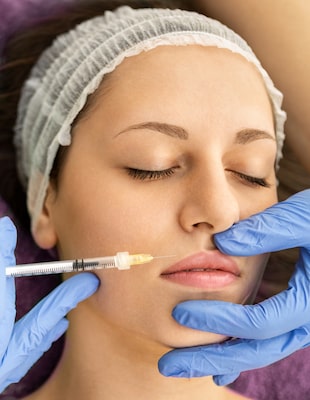 The study, which was published in July of 2020 in Scientific Reports, discussed how the research team discovered that people who had Botox injections at six different sites in the body had a lower level of depression than patients who received different treatments for the same conditions in the body,

According to Ruben Abagyan, PhD, the study leader, and a professor of pharmacy, “For years, clinicians have observed that Botox injected for cosmetic reasons seems to ease depression for their patients. It’s been thought that easing severe frown lines in forehead region disrupts a feedback loop that reinforces negative emotions. But we’ve found here that the mechanism may be more complex, because it doesn’t really matter where the Botox is injected.”

Abagyan led the study with a German psychiatrist and researcher who had conducted studies in the past about the ability of Botox to lessen depression as well as a pharmacy student (at the time) who is now an FDA research fellow.

The FAERS database includes over 13-million voluntary reports that were shared by people who experienced an adverse effect while taking a medication. The research team found they were able to use the database to find reports of an absence of a health complaint when a person takes a medication (if it is compared to a control group). When it came to their research project, they looked for the absence of depression.

The research team put their focus on almost 40,000 reports found in the database of people who had an adverse event occur after they had a Botox treatment. In general, the reports include information regarding eight different reasons for Botox treatment along with multiple injections sites that included the forehead, bladder, limbs, and neck. Once they had the reports they wanted to focus on during the study, they applied a mathematical algorithm to search for statistically significant differences that existed between those who used Botox and patients who experienced a different treatment for the same conditions as those who used Botox to treat them.

Botox Study Results – What Did the Team Discover?

The results reported by the research team included the statistic that depression was reported forty to eighty-eight percent less often by patients who were treated with Botox for six of the eight conditions and injection sites.

The researchers noted this finding helped to support a new treatment that can impact the mood of a person as well as fight depression because the finding was based on a rather large amount of statistical data as opposed to observations on a more limited scale.

It needs to be stated that the data that was used in this study was not exclusively collected to explore the relationship between depression and the use of Botox. Plus, the data from FAERS only represents the subset of Botox users who were reported as experiencing negative side effects. Even though the team of researchers did not include reports that also involved a person taking antidepressants, the use of additional over-the-counter medications or prescriptions might have been underreported in some cases.

Botox and Depression – What is the Next Step?

While the clinical trial related to the study only tested the injection of Botox into the forehead, Abagyan said that additional clinical trials might be needed to determine the best treatment site as well as the best dosage choice in administering the medication in the specific case of treating a person for depression.

In addition, there is also a need to determine the mechanism that allows Botox to serve as an antidepressant. The research team did say they have imagined a few possibilities that might be worth investigating including whether or not Botox can be transported to the central nervous system regions that are involved in the emotions and moods of a person. There is also the idea that, since Botox is often used to treat chronic conditions that might possibly contribute to depression, the success Botox has in treating the underlying problem might also have an indirect impact on relieving depression felt by a person.

It has been estimated that more than 264-million people across the globe experience some form of depression. While it is frequently treated with treatments such as psychotherapy and selective serotonin reuptake inhibitors, these approaches do not work for all patients. This is one of the reasons that medical professionals and research teams are exploring other treatment options such as the injection of Botox into the forehead.