One of the biggest pop stars on the planet right now is 19-year-old Billie Eilish. She is almost as well-known for her appearance as her music. Eilish has normally been spotted with her signature black hair and green highlights, a hat often covering her head and a clothing style that covers her body without showing off her figure at all. Her image has certainly changed in the last few weeks as she debuted a new blonde hairdo and a new sexy image thanks to a photo shoot featuring her wearing lingerie. In addition to her new look, some old speculation about possible Billie Eilish plastic surgery has surfaced with many members of the public wondering if the singer has made some alterations or enhancements to her appearance. 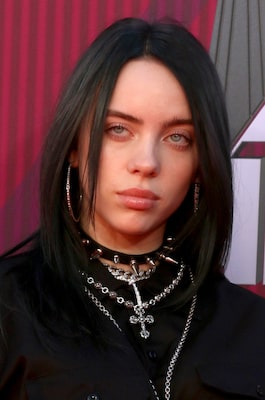 When examining the appearance of Billie Eilish, one of the first features on her body that stands out is her lips. They stand out much more than they did in the past and have a much fuller appearance that is quite striking and one of the most noticeable features on her body.  Her prominent lips could be the result of makeup such as lip gloss or she could be receiving lip filler on a regular basis to provide her lips with a fuller and more enhanced appearance. While discussing the current look of her lips, one Internet user said, “She always has that dead look in her eyes now, whereas in the left she looks more lively. But I think she have had her lips done and that looks about it to me.”

There are also some celebrity watchers that seem convinced the singer has made some minor adjustments to her nose. They point out that her nose is not as full or wide as it was in the past and it seems to have a more refined look to it. The changes in her nose are often speculated to be the result of rhinoplasty.

In addition to the procedures discussed above, there has been some speculation about Billie having Botox procedures performed along with some changes made to the appearance of her chin.

The fans of this young singer pay attention to her appearance and comment whenever they feel there is something “off” or different about her looks. There was much speculation about her on social media during the Grammy Awards earlier this year. Billie and her brother, Finneas, won an award for their song that is featured in the upcoming James Bond movie. During the show, Eilish could be seen hiding her forehead with a bandana. The singer was later spotted wearing a bucket hat at the show where she also won the Grammy for “Record of the Year”.

A TikTok video was leaked and the video included audio of Billie telling someone, “I can’t take off my wig”. There was another TikTok video that debated whether or not she said “wig” or “anything”.

This speculation about her hair, and a possible wig, was followed up by Eilish surprising her fans on Instagram Stories by asking the question, “Can you guess which color?” The next day, she asked her fans, “Did you guess correctly?” 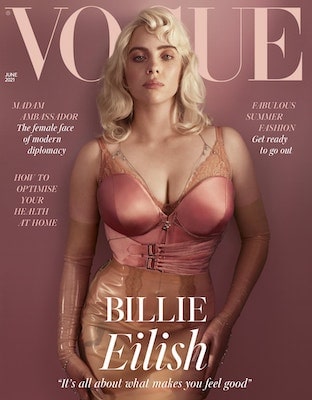 As mentioned earlier, Billie has been receiving positive feedback thanks to her latest photo shoot. One of the items she wears in the photos is a corset due to insecurity about her stomach. She spoke out about wearing the corset in order to prevent any sort of negativity or backlash about the decision.

She was aware of the fact that some people might questions her decision to wear a corset since she often discusses her support of “body positivity”. Her answer to wearing the corset was “It’s all about what makes you feel good. If you want to get surgery, go get surgery. If you want to wear a dress that somebody thinks that you look too big wearing, (expletive) it – if you feel like you look good, you look good.”

It is not a big surprise that the singer would try and prevent any prolonged discussion about her clothing choices. Last October, a photo taken by the paparazzi showed her wearing a tank top. The photo became a sensation simply for the fact that the public was not accustomed to seeing her in clothes that can be best be described as “form-fitting”.

Before the tank top photo ever hit the Internet, Billie said she felt the need to always wear clothes that were “800 sizes bigger than she is” so the public could not see her body and/or form opinions on her body. “In a 2019 video, she said, “I never want the world to know everything about me. I mean, that’s why I wear big baggy clothes: Nobody can have an opinion, because they haven’t seen what’s underneath.”

In the past, Eilish has discussed her former “horrible body relationship” where she did not eat much and was “like, starving myself”. Her relationship with the public viewing her body has been a complicated one. Billie has stated the criticism she received about her body offended her but so did any praise she received about her appearance and the fact that she seemed to feel “comfortable in her own skin. The more the Internet and the world care about somebody that’s doing something they’re not used to, they put it on such a high pedestal that then it’s even worse.”