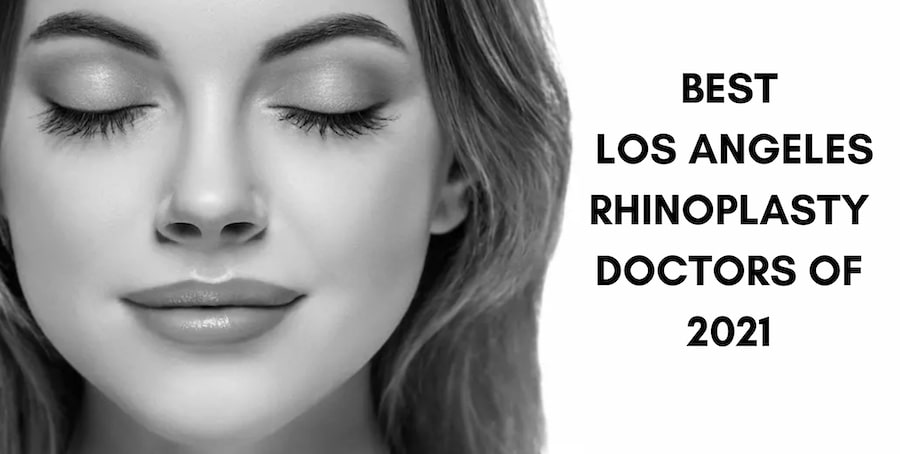 The nose is one of the most prominent features on the face and gets a lot of attention from others. Patients that want to make changes to the nose often choose rhinoplasty to make long-lasting surgical changes that alter or enhance the appearance of the nose. In addition, rhinoplasty can make it easier for patients to breathe on a daily basis. When it comes to picking where to have the surgery performed, many people choose Los Angeles rhinoplasty because they want to get the same type of nose as their favorite celebrities. The Cosmetic Town research team recently conducted research to determine the best doctors currently performing rhinoplasty in the greater Los Angeles area.

Here is our list of the Best Los Angeles Rhinoplasty Doctors for 2021:

Want to know more about the methods used to choose the top doctors on this list? You can get all the information below or click here to learn more about the Cosmetic Town intelligent system.

Best Doctors – How they were Picked by Cosmetic Town

Our research team developed and followed strict criteria when researching the doctors that were eligible for this list. The steps they followed to learn more about the qualifications of each doctor included:

Rhinoplasty – How it is Performed

Rhinoplasty, which is also known as a nose job, makes desired changes in either the look or the functionality of the nose. In addition, rhinoplasty can address both aesthetic and functional issues at the same time. The changes a person wants to make to the nose are gained through alterations to the bone or cartilage of the patient. The changes to the bone and cartilage are also made with the goal of ensuring the nose still has a balanced appearance with the other features of the face.

Common reasons patients want to undergo rhinoplasty include altering the shape of the nose (changing the size of the nose or refining the tip of the nose), addressing any issues that interfere with breathing and repairing damage suffered by the nose after an injury.

Rhinoplasty surgery can be performed as open or closed rhinoplasty:

The surgeon begins the rhinoplasty process by creating incisions in the targeted area of the nose. After the incisions are made, the skin is separated from the bone or cartilage so the surgeon can begin reshaping the nose. The amount of bone or cartilage that needs to be altered or removed will be decided in advance. If the nose needs additional cartilage added to it in order to achieve a new look, the surgeon will remove some cartilage from another part of the body.

Once the changes are made, the skin will be redraped back into place and the incisions will be closed

Los Angeles Rhinoplasty – Why it is So Popular

Patients that are interested in undergoing rhinoplasty often choose Los Angeles rhinoplasty due to the myth of the California lifestyle and a wish to look like the TV and movie celebrities they admire. Los Angeles rhinoplasty doctors treat patients from all over the country as well as surrounding cities and areas such as Beverly Hills, Hollywood, Santa Monica and the San Fernando Valley. These doctors examine the current condition of the nose of the patient to determine if the person is an ideal rhinoplasty patient. The doctor will also discuss the difference between open and closed rhinoplasty and set realistic expectations about the final results.

Anything for a Role – Actor has Limb Lengthening Surgery