Bella Hadid Reveal - Will it Slow Down Plastic Surgery Requests?

In March of this year, Bella Hadid spoke to Vogue about a number of topics including the regret she feels about having plastic surgery as a teenager. In the interview (which Cosmetic Town News covered here), the model spoke openly for the first time about having rhinoplasty as a teenager. The admission was surprising as she had spent years issuing public denials about the procedure. Hadid said she had the surgery because she always felt like she was “uglier” than her older sister and fellow supermodel, Gigi Hadid. This admission is significant as many celebrities do not admit to having any type of plastic surgery procedure. It is also significant for another reason that is discussed in this article.

Bella Hadid – Will Her Rhinoplasty Influence Others? 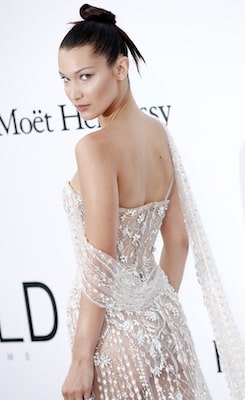 One of the main regrets Hadid expressed after her rhinoplasty surgery was wishing she had “kept the nose of my ancestors” because she believes she would have “grown into” the natural appearance of her nose over time.

Bella Hadid has a huge social media presence including over 50-million followers on Instagram. In addition, her supermodel status gives her recognition all over the world and the decisions she makes in her life have an influence on her fans of all ages including millennials and Gen Z. At one point during her interview with the magazine, she admitted her style is imitated by so many people that she can look outside and view “a hundred people dressed exactly like me.”

Since so many people follow her fashion decisions, there is another school of thought that says the public will also follow her decisions when it comes to plastic surgery. Her nose has been cited by some plastic surgeons as one of the most desired celebrity noses by patients thinking about making a change to the size or shape of their nose. In addition, a doctor in the United Kingdom reported last year that Hadid’s face was the most requested celebrity face of the previous year. It has also been reported that many of the requests to look like Bella Hadid have come from teenage patients. As recently as 2020, the American Society of Plastic and Reconstructive Surgeons reported that rhinoplasty was the most popular choice among teenage patients.

Bella Hadid – Is She a Plastic Surgery Inspiration?

It is not possible to know how many of those teenage patients were inspired by the appearance of Bella Hadid’s face. Her Vogue article can serve as an inspiration for patients to think twice about having plastic surgery due to the regrets she expressed about having a nose job.

It needs to be noted that the choice to have plastic surgery is not a decision that should be made lightly. It is a decision that can impact the way a person looks for the rest of their life and it also comes with some warnings. Plastic surgery can include side effects such as bruising, scarring, and swelling that can last for several weeks to several months after a procedure. There are also some patients who might not be mentally prepared to accept the changes from the surgery which can lead to changes in their self-image along with depression and body dysmorphia. Plus, teenagers still have bodies and brains that are in the process of developing which means they might not be mentally mature enough to make changes to their look through a surgical procedure.

Since Bella Hadid is one of the most famous supermodels in the world, it is often unrealistic for people to expect to obtain her look. Those who try, and do not succeed, might start to have negative thoughts about their bodies. It has been reported that 6% of teens with suicidal thoughts have cited Instagram as one of the causes for these thoughts (according to internal research from Facebook). In addition, an internal presentation at Facebook reported “thirty-two percent of teen girls said that when they felt bad about their bodies, Instagram made them feel worse.”

These feelings about their appearance are not helped by celebrities that deny having plastic surgery and also try and make their fans think their appearance is natural. The denial of making cosmetic alterations to their body can lead to a greater amount of anxiety and confusion on the part of their teenage fans.

The fact that Hadid admitted to her rhinoplasty surgery, while also addressing the loss she feels about her heritage, shows her fans that the supermodel does have some mixed feelings about the changes she had to make to further her career. The honesty that she exhibited will not cause every other celebrity suspected of having plastic surgery to admit to making changes to their appearance. However, it can have a positive impact on her fans but showing them what sounds like a good idea at the moment might actually be something they regret in the future. It might help them focus on what they will look like if their features progress naturally as opposed to what they look like using filters on social media platforms.